Anagolay solves these problems by providing a solution that runs on any WASM-able environment.

Within the Anagolay Network context, Operation defines a library, its name, inputs outputs, dependencies, and its type. In order for all Operations to talk to each other, we need to standardize a few things. First, we need to have a strict definition of the Operations' input and the output parameters. We also want to be able to chain or link many Operations to produce more complex behavior which is only possible if the chained ( linked ) Operations can understand their mutual inputs and outputs.

Operation is an abstraction that represents one task in a sequence of tasks, a Workflow.

The Operation execution is not necessarily tied to any blockchain, but some of them are capable to run in no-std environment, thus, on-chain. For Example, Anagolay is using a Workflow to generate the CIDs on-chain.

An Operation MUST produce the same result on Earth as well on Mars or anywhere else in the Universe given the same data.

An Operation is made of compiled code with WASM bindings so that it can be used by both the JavaScript engine and the compiled Rust code.

While the describe function produces the manifest data, this data along with a content identifier (CID) represents the Operation manifest which is stored on-chain. The manifest allows introspection of the Operation interface since it contains the following information:

In order for the Operation to produce its own manifest from the code, the following steps are necessary:

The attribute describe provides additional information not available in the Cargo.toml or in the execute function signature, like the groups the Operation belongs to and its configuration.

Note that the function asynchronously returns a Result that is finally bound to a Javascript Promise in the WASM implementation.

While the support for no-std is assumed to be disabled by default, it must be declared here as std feature if it’s available: This means that it will be possible to turn on and off the std capability by enabling such a feature.

Another useful application of the features switch along with configuration is conditional compilation when built in a Workflow: by defining a feature prefixed by config keyword and concatenated with the configuration key (hasher in the example) it’s possible to enable the Cargo feature respective to the selected configuration (config_hasher_sha2_256 or config_hasher_blake3_256 according to the configuration passed to the Operation).

Make the execute and describe and execute function available to wasm

A common implementation of the main method is provided by an_operation_support::main. It’s sufficient to pass the arguments, including the describe function, so that the program argument -m or --manifest will produce the manifest data as output

When we create and publish the Operation, we are creating the on-chain Manifest and initial Version.

It may happen that one Operation depends on the types of another Operation, as a dependency in Cargo.toml. In this case, it should use the git resolution for that dependency indicating the repository from the dependency manifest. By doing so, when the Workflow is built, the appropriate version will be patched for the dependent Operation.

For example, op_cid declares a dependency on op_multihash in the following way:

This dependency will be patched to the correct Operation Version of op_multihash in the Workflow build.

We distinguish between the following interfaces for an Operation implementation;

the advantage of formally defining such interfaces is that every Operation must comply with the same definitions. In turn, this means being able to create a complex flow of Operations (a Workflow) and execute them automatically. This also allows fine control of execution, for example, the possibility to either compile a whole Workflow in Rust or dynamically execute each Operation from a Javascript engine through their WASM interface.

The Javascript engine can access only methods and types that are exported in the bindings, which are:

🛠 This bindings will be automatically generated in the future.

Dependencies on other Operations

A custom Operation implementation can rely on already existing types and methods and on the previous execution of other Operations to produce the required inputs. Thus, there are two distinct approaches to dependency management:

It's possible that the execution of the Operation requires remote services, but not always desirable. In fact, this introduces a point of failure in the reproducibility of the Workflow because of side effects on remote systems. On the other hand, provides greater flexibility.

This is still compliant with the philosophy that, given the same or similar input, the Workflow will always produce the same result even if this input comes from a remote API invocation.

Examples of remote invocations are:

In order to comply with Remote APIs invocation, all Operation execution happens asynchronously. This means that the caller is not blocked until execution completes.

Each Operation execution produces an output that can be used as input to execute a subsequent Operation. In order to be able to pass the WASM boundary, the output is serialized to be passed as input of the next execute() function, where it gets deserialized.

While in the execution function, deserialization of the expected input happens: 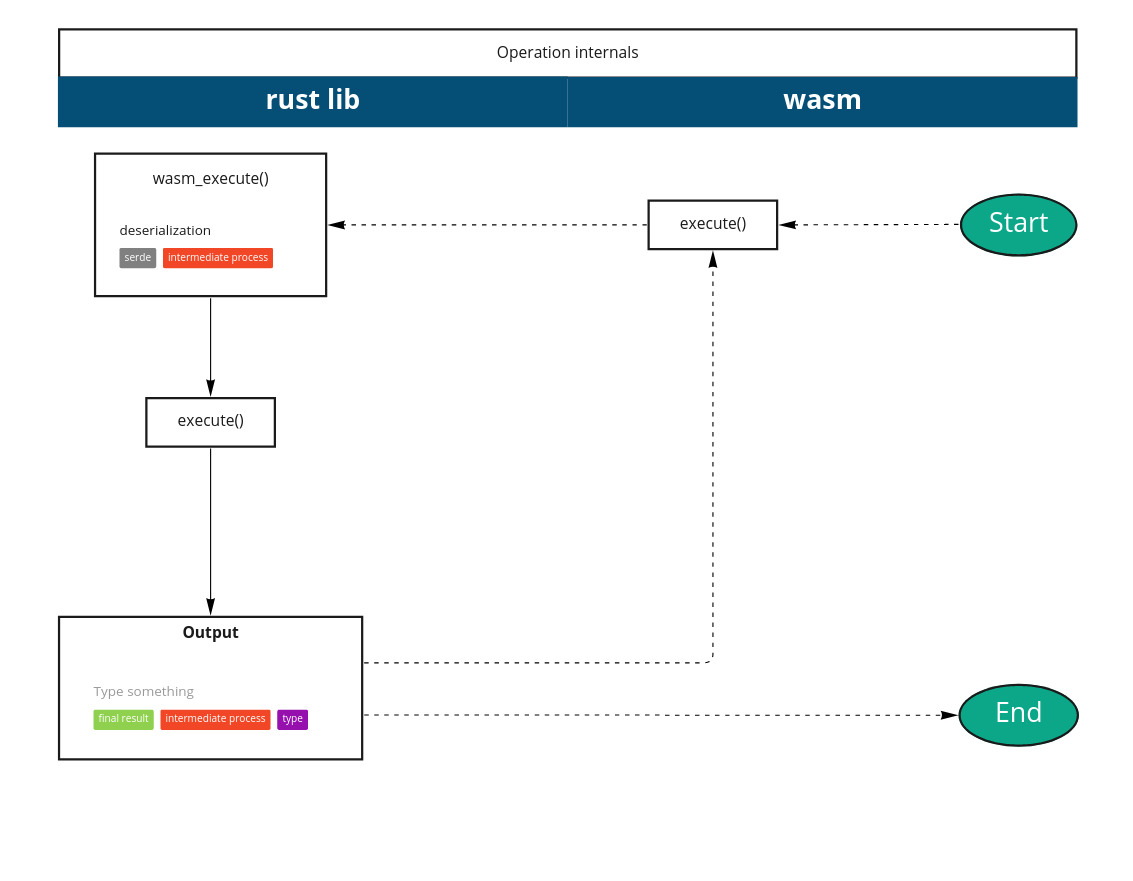 When the execution flow is over, the final result is retrievable from the execute method. Assuming that both the array of inputs and the configuration are defined in context and the execute function of the Operation is imported, here goes the call in a Javascript environment: